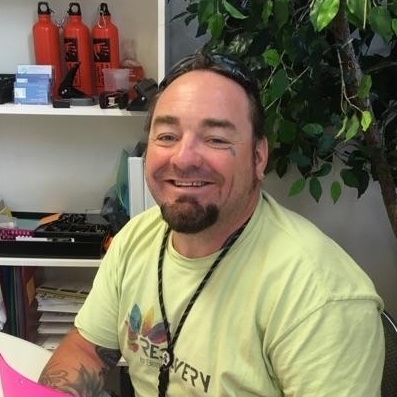 Jeffrey was born, raised and lives in Toledo, Ohio. He grew up no different than some of the other kids in the city and at the other end of the spectrum from most. He played baseball at Elmhurst and DeVeaux but when he began playing soccer at the West Toledo YMCA he found his first passion. He went onto high school playing and lettering Varsity all four years at Macomber-Whitney, where he graduated in 1990. It was during this time he found his other passion and “escape” in music.

Streeter attempted attending college but this is not where he wanted to be. His love for music and the lifestyle it encompassed did not mix well with his class schedule. His passion to perform and the life it offered meshed well and allowed him the ability to not only perform regularly but to tour from Chicago to New York and Michigan to Florida. This regime continued along with working odd jobs until April 2004 when he made a decision to no longer use drugs or alcohol, something that had been put into his body at least one time every year of his life until this point. After a night of chaos he woke up the next morning having what he now knows was a spiritual awakening.

Streeter dove into his new lifestyle, only as an addict would, head first and without a safety net and most importantly without drugs or alcohol.  Four months into his sobriety he walked off stage and into the classroom at Lourdes College where he earned a Bachelor’s Degree in Social Work with a minor in Criminal Justice in three and a half years. He then went directly to the University of Michigan where he earned his Master’s Degree in Social Work in just under a year.

Streeter landed a job at A Renewed Mind working with youth and young adults that have issues with drugs and alcohol. He quickly gained the attention of many community members due to his ability to relate to youth and their life struggles that may or may not even involve drugs or alcohol. Today at A Renewed Mind he continues to counsel youth, adults and families, build programs that meet the needs of the youth and the community. He is also an adjunct instructor in the Department of Social Work at Lourdes University and works as the social worker for the Spring Green Education Foundation’s Youth Diversion Program.

It has been said that Streeter “is lots of fun, knowledgeable and a riot to talk with. Kids love him… he’s a cross between your favorite uncle, your worst nightmare, and an undercover cop with tattoos.”